• This Ram Air III–powered example of the 1969 Pontiac GTO Judge is up for auction at Bring a Trailer right now.

As the proud owner of a 1968 GTO, I would be remiss not to single out this 1969 GTO Judge as a special car up for auction on Bring a Trailer—which, like Car and Driver, is part of Hearst Autos. The Judge is a special example of a muscle car from the late ’60s. Just like the current owner of this 1969 GTO Judge, I also received mine by way of my father, who spent his summers in college working at the plant in Pontiac doing various jobs. One summer he worked in the iron foundry shoveling molding sand, one summer in the assembly line plant on the chassis line, and his last in the finishing plant adjusting headlights and prepping for shipping. It seems only fitting that he ended up with a GTO one day himself.

CLASSICS FROM THE C/D ARCHIVE 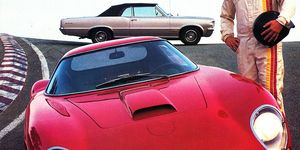 Tested: GTO vs. GTO Two Icons of the Past Face Off
Tested: 1964 Pontiac GTO Takes on Ferrari’s GTO 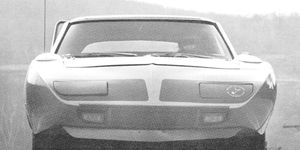 In Search of the Good Ride

This GTO Judge is currently located in California; however, it was originally delivered to a dealership in Anchorage, Alaska. This car comes with a clean title, but more important, it comes with a Pontiac Historic Services documentation showing that it is indeed a true Judge. This car has been refinished in Carousel Red and features the optional Judge package which includes a black grille, decklid-mounted wing, tricolor graphics, and “Judge” badging on the front fenders.

The replacement 400-cubic-inch Ram Air V-8 features a four-barrel carburetor and electric ignition. In addition to the V-8 and Muncie M20 transmission, it has a hood-mounted tachometer, power steering, 15-inch Cragar S/S wheels, power front disc brakes, retractable headlamp covers, and a Hurst T-handle shifter. The Hurst shifter was factory installed on manual transmissions in the Pontiac GTO. Pontiac also offered a dual-gate shifter, the unfortunately named His and Hers, which allowed for manual shifts for drag racing or standard automatic function.

This GTO Judge’s additional equipment includes a body-color Endura front bumper, chrome rear bumper, polished rocker and wheel opening trim, hood-mounted scoops, and a dual-outlet exhaust below the rear bumper. Like any loved classic car, this one has a couple of dents, a little rust, and some paint chips, scratches, and blemishes. The cabin features bucket seats and a rear bench upholstered in black vinyl along with a matching dashboard and faux-wood dash accent. The door locks do not work on this car, a similar issue I have with mine and, from what I’m told by my local classic car shop, a common issue with the GTO.

The Judge was intended not only to help with GTO sales, but also to be a direct competitor to the Plymouth Road Runner. Halfway through 1971, the Judge was discontinued, although the GTO kept going through 1974. While it is a privilege to be the owner of any American muscle car, a Judge would surely be a Goat to be proud of. The auction is online through Sunday afternoon, April 24.